AUGUSTA, Ga. – Aug. 17, 2021 – PRLog — Since 2017, The Spin Awards, an organization that honors those who spin the Gospel, has recognized some of the very best in the Christian Gospel Radio Industry. From radio announcers to radio stations, terrestrial and internet alike. The Spin Awards has been and will remain for radio and radio only. Growing from a one night event to a gala that spans over 3-days, The Spin Awards is pleased to announce the addition of Industry Veteran and Spin Awards Hall of Famer, the icon himself, Mr. Jerry Smith as co-host of the Spin Awards Pre-Ceremony, Friday, Oct 22, 2021 in the Atlanta, Georgia area. Smith is the CEO of JAS Consulting and Owner of Flavor 97.3 Radio Station.

“I’m thrilled that Jerry Smith will be gracing the Spin stage to co-host the Pre-Awards Ceremony. He’s been such a fixture in the Gospel radio industry and it means so much to have him join the Spin family,” states BM Snowden, Spin Team Member.

About Jerry Smith
Smith is a sought after speaker in the music industry and often is invited to be on Gospel music panels on an annual basis. Smith has been in the music and entertainment industry for 36 years and was the content coordinator for Radio One’s gospel stations overseeing 14 stations and helped to launch 7 of those stations nationwide. He believes that he is blessed to have a career that he loves to do that benefits family, friends, and community which drives him to use his God-given gifts to bless and empower people. Jerry served as the Chair for the St. Jude Children’s Research Hospital Radio Cares Advisory board from 2013 – 2018. Smith is married to Cheryl Perry – Smith and has two beautiful daughters, Quintel and Lauren.

About The Spin Awards
The Spin Awards event was created with the intent of honoring those who spin the gospel message. All entity Spin Awards brands are subsidiaries of Heart 2 Heart Music Ministries of GOD, a non-profit outreach organization.

Make a tax-deductible contribution to The Spin Awards today

Your Donation helps us give back to  spinners who work within the Christian Gospel Radio Industry often without pay for long hours using their own resources to make the music magic happen for our ears. Please join us in recognizing their labor while providing quality free events to attendees.    Please donate now thought our parent organization, Heart 2 Heart Music Ministries of GOD, a 501 C  non-profit organization dedicated to reaching the hearts of people with the positive message of faith […]

By: Uplook Management  Emcee N.I.C.E.ATLANTA - Sept. 2, 2021 - PRLog -- Since 2017, The Spin Awards (TSA) has honored those who spin the Gospel message. This year TSA has selected Christian Hip Hop Artist and Radio Announcer EMCEE N.I.C.E. as its inaugural Spin Awards Radio Man of The Year. TSA is committed to recognizing some of […]

Jerry Smith, Radio Music Industry Veteran AUGUSTA, Ga. - Aug. 17, 2021 - PRLog -- Since 2017, The Spin Awards, an organization that honors those who spin the Gospel, has recognized some of the very best in the Christian Gospel Radio Industry. From radio announcers to radio stations, terrestrial and internet alike. The Spin Awards […] 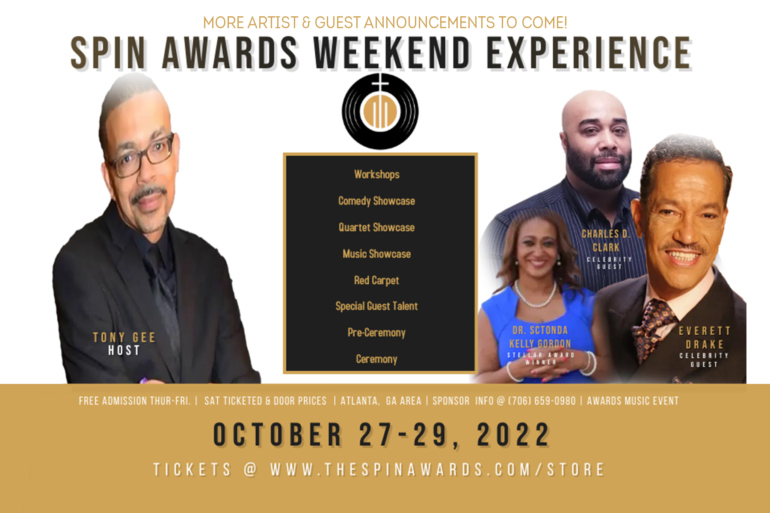